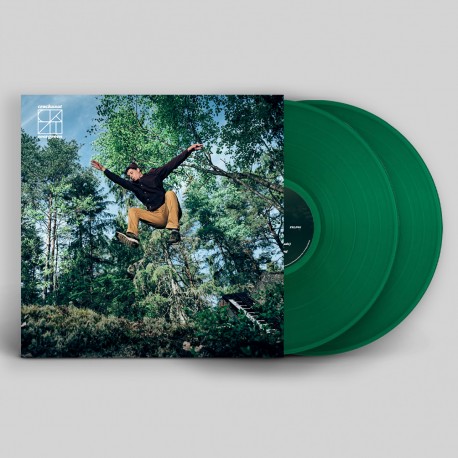 This product is no longer in stock

Notify me when available

Freerange Records are thrilled to announce the arrival of Crackazat's latest long-player, the scintillatingly soulful and jazz-enriched masterpiece, 'Evergreen'.

There can be few artists to have emerged in the last decade or so who've made a more indelible mark on the deep house universe than producer, Ben Jacobs, better known as Crackazat. The accomplished musician's effervescent productions routinely hit the sweet spot between elemental dancefloor fire and cerebral musicality – thanks to a propulsive sound combining influences of jazz, house, garage, funk, hip hop, Latin, neo-soul (and far beyond). While he's already forged an instantly recognisable sonic palette all of his own, new album 'Evergreen' represents his most accomplished work to date. Making his full vocal debut while introducing a new level of songwriting prowess to his long-established dancefloor credentials, this is the complete Crackazat.

Composed during – and undoubtedly informed by – these trying times, 'Evergreen' explores themes of adversity and gratitude, arriving as both a masterclass in contemplative songwriting and a celebration of musical influences. Elegantly bridging the gap between the soulful house underground and jazz-flecked crossover realms – inhabited by the likes of Jacob Collier, Thundercat, Tom Misch, and Jordan Rakei – the album echoes of a time where jazz-funk sensibilities and popular appeal were not mutually exclusive. Few artists boast the musical aptitude or creative vision to attempt such a bold fusion of styles, and thanks to its exceptional execution and irresistible appeal, 'Evergreen' is primed to introduce Crackazat's sound to an entirely new audience.

'Evergreen' is endowed with a distinctly live feel throughout, with virtuoso musicianship combined with carefully assembled song structures – elements so often missing in the dance canon. “It's the album I’ve always wanted to make” says Crackazat. Soul-heavy vocals – performed by Jacobs himself – are a cornerstone of the collection, with the power and soul of his delivery proving something of a revelation. “By far the hardest part was getting my vocals to a standard I was happy with,” he says. “So I was over the moon when Freerange responded to the first draft with two thumbs up and a big grin.” The album's arrival on benchmark UK deep house label Freerange feels like a particularly natural fit. When, in 2020, Crackazat started posting clips of himself singing alongside live bass and Rhodes, it quickly piqued the interest of the label's ever alert A&R team. “Crackazat really nails the sonic realm where crunchy house beats inspired by the likes of Masters At Work and Mood II Swing meet contemporary neo-soul and jazz-influenced rhythms,” says the imprint's co-founder, Jimpster. “There’s not many that can fuse the two so well and I get a sense that big things lie ahead for Ben. We're very proud to be able to release this brilliant LP on Freerange!”

Blending the purest forms of deep house with authentic jazz sensibilities, opening track 'Beacon Of Light' lays down a tantalising statement of intent – with its combination of live instrumentation, heartfelt vocal, club-ready beats and compelling arrangement offering a vivid introduction of what's to follow. Illustrating the pop-centric focus of the album, 'Everybody Talks About It' explodes with emotion – its searing vocal rising over shimmering pads and bass before building to a horn-filled crescendo, showcases Crackazat at his song-writing zenith.

The deep disco of 'I'm Easy' sees blissful chords glide over weighted bass as the vocal powers across the panorama, bursting with Quincy Jones-inspired horns above delicately woven keys and raw house drums. Nowhere are the album's meditations on hardship more vivid than on the modern jazz ballad 'Simple Things’, This compelling composition blends shades of Robert Glasper with futurist deep house to dramatic effect.

Fusing modal jazz with UK garage, we segue directly into the warm throes of an enraptured dancefloor via the irresistible bump of 'It's All Different', its soulful vocal embellishing a heavy club rhythm as the trumpet solo and Rhodes chords cascade across the horizon. Title-track 'Evergreen' opens with a sprightly jazz swing before dusty drums add body to the sophisticated instrumentation, presenting jazz and house as a single entity as the well-orchestrated wind instruments, keys and mallets dance over an improvised walking bass line. The distant vocal elevates the track into the stratosphere before the arrangement resolves, neatly leading us into the Collier-esque accapella and vintage jazz aesthetics of 'Cedencia', where signature vocal cadences ascend to celestial heights for an interlude that ushers in a departure from the futurist first-half of the album.

Arriving in the funk-infused second act, the salsa rhythms of 'True Power' intoxicate as they propel the Peven Everett-inspired vocal, with driving percussion skipping over live bass and keys before horns add tension to the groove, dissipating for a dub-heavy outro. The scattered, broken jazz of 'Save Something' finds Crackazat and his live band in full effect. Fiercely dynamic while intellectually riveting, the track incorporates Latin energy with understated cool to devastating effect.

Once again illustrating an unparalleled songwriting prowess, the Hancock-esque e-piano solos, slap bass and enthralling lead vocal of 'Nominee For Love' prove spellbinding as they combine, the sing-along chorus interplaying with buoyant horns for an unfettered celebration of life. Maintaining the celebratory sentiment, boogie-themed 'Thank You' arrives as an exuberant outpouring of gratitude, once again marked by breathtaking orchestration and a proudly positive aesthetic as loose-limbed piano solos and boogie bass cement the track's authentic Stevie meets MAW feel. Finally, the immaculate collection comes to a close with the self-nurturing intention of 'Good Enough', where sparkling chords, emotive synth solos and impassioned vocal merge for an emotional modern soul ballad.

'Evergreen' is nothing short of a triumph, exhibiting all the hallmarks of a future classic while propelling Crackazat into stratospheric artistic dimensions. Expertly fusing primal dance magnetism and jazz dexterity with a flawless production sheen, this remarkable album is destined to find its way into the playlists of a multitude of admirers while enhancing this exceptional artist's already glittering reputation.